Google Analytics 4 is here. What will the future bring us and why is this a better name than App + Web?

Just over a year ago, in August 2019, Google released the fourth major version of Google Analytics. Where in March 2013 Universal Analytics was introduced with a public beta and with that relegated the second version from 2005 to Classic Google Analytics, time came for App + Web properties. For the first time, it is possible to unite both web and app data in one and the same property. Of course it  is a very nice development that App and Web data can now be combined, but in my opinion the development of these new properties is a lot bigger than just merging both datasets. In this article I want to further discuss the functionalities that, in addition to combining app and web data, are interesting for Google Analytics and its future.

Google Analytics for Firebase
To make app development easier, Google introduced Firebase in 2014. A package of supportive tooling for apps including crash reporting, A / B testing, deep linking (for SEO / SEA) and Google Analytics.

Unlike the properties that Google Analytics has developed for web environments, the data set of Google Analytics for Firebase is much more focused on events that take place during the usage of the app. You could think of these events as Performance Indicators (PIs). A whole set of events is automatically logged with the implementation of Firebase, in contrast to web, which requires separate set up activities. Events you can think of are the very first time the app is opened (first_open), every time a session is started (session_start) and every time a screen is viewed (screen_view).

Scopes
Measuring based on events is significantly different from how web measurements worked until now. Within the web measurements of Google Analytics, an important part was that everything depended on scopes. You have user scope, session scope and hit scope. Because dimensions and metrics were all based on these scopes, knowledge of the dataset was extremely important to be able to perform reliable analysis. For example, it is not possible to combine dimensions and metrics from different scopes, like the combination sessions (session scope) per page (hit scope). With event-based measurements for web, this is a thing of the past.

AI, algorithms, predictive analytics
Another big advantage of event-based measurement, which I am personally very curious about, is the application of Machine Learning and Artificial Intelligence functionalities. Previously there were only a few different types of hits (points of measurement), with page views and events as the majority. With an enhanced implementation, most of my clients have about 15 percent of the total number of hits consisting of page views and the other 85% are events. Because these events could be completely customized, it is difficult for a computer to attach a certain priority to them. Is scrolling on a page more important than a purchase? As humans we know that this isn’t the case, but a computer does not when both are sent as an event.

Similar to Google Analytics for Firebase, Google Analytics 4 has standardized a lot of events that are tracked automatically when you implement the tracking code on your website. This makes it much easier for a computer to read the different types of events and determine which types of events are more important than others. Which will greatly increase the quality of Machine Learning and Artificial Intelligence. 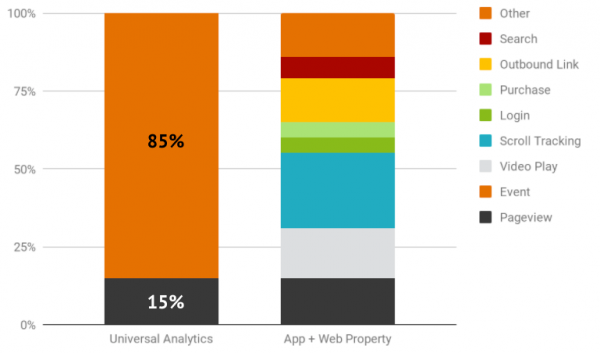 Google Ads
The integration with other Google products works seamlessly, as we are used to from Google. The first Machine Learning and Artificial Intelligence capabilities are already developed. That should make targeting relevant audiences much more efficient and easier.

What to do now?
With the change of the name to Google Analytics 4, we are one step closer to the future of Google Analytics. However, the product is still under construction and not all functionalities are developed at the moment. For the time being, the advice is to implement these new Google Analytics 4 properties on your website in addition to your current Universal Analytics properties. This will let you build up some historical data and you can slowly migrate to the new way of measuring and be ready for the future.